Sunday night in Soho and it was a little quiet.  Everyone had obviously stayed at home to watch Adele blubbing at The Oscars Award Ceremony in Hollywood or had succumbed to the pulling power of One Direction on stage at the London O2 Arena. For, despite much favourable, even excitable press coverage over recent live shows and of course, their acclaimed second album “I Am a UFO In This City”, LostAlone’s audience was disappointingly thin for the last night of their headline UK tour.

Support came from two home-grown outfits.  Firstly, Oxfordshire’s pop/punk rocking lasses, Evarose who displayed a refreshing blast of promise and attitude from a young, all girl band, despite the glare of Disney Camp Rock style within their vocals, riffs and beautiful smiles! 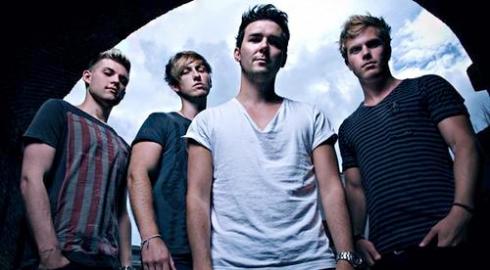 Next up were squeaky clean London lads The Dead Famous.  Gigging together for just over a year, the line up took shape when drummer Dan Hetherton (formerly Elliot Minor) and singer James Matthews (formerly Go:Audio) got together to devise a new project.  The result is solid, mainstream sounding pop/rock that carries various influences such as Kings of Leon and Stereophonics.  A smattering of dedicated followers mouthed the words to most of the lyrics, but I had to admit that One Direction may have been more appealing for a while, until the debut single “Hide Your Halo” snapped it’s fingers at me, heralding the most outstanding track of their short set.

So, inside this intimate venue, with this even more intimate crowd, how did LostAlone turn the last night on the road into one to remember?  Despite having toured as supports to some very big names in some very big places, (My Chemical Romance, 30 Seconds to Mars, Paramore, Enter Shikari to name but a few), small, it seems, to LostAlone, is beautiful.

Steven Battelle (guitar/vocals), Alan Williamson (bass/vocals) and Mark Gibson (drums/vocals), produce music that is intriguing yet very difficult to put a finger on and certainly gives the impression of being out of this world, although, in truth, it is a delicate mix of what is and what has been before.  Songs take different shapes throughout, mixing thrash, punk, rock, pop and soaring harmonies.  They are a quirky trio, interesting and brave and although they have been likened to MUSE and Queen, there really is so much more in there.  Possible influences from the producer of their second album, Gerard Way (My Chemical Romance) are detectable in contorted “emo” style, but the melodies and lyrics are all individual to a band that strives to be apart from the crowd.

Despite the stagnant presence of their familiar audience tonight, they embraced the staid atmosphere, cut it with sharp hooks; slashed it with chilling vocals and tenderly wrapped us in the comfort of a seated circle on the floor in the middle of which Steven Battelle delivered a mesmerising acoustic version of the ballad “Orchestra of Breathing”. It was obvious that the young audience appreciated this sense of tribal belonging and we could see that Battelle really does have a talent for connecting with his listeners.  From the beginning of the set which opened with the majestic belter “Vesuvius”, through to the grungy grooves of “Blood is Sharp”; the three part harmonies of “Creatures”; the anthemic delivery of “Put Pain to Paper” and the cantering riffs of “Do you Get What you Pray For”, Battelle involved his audience throughout. Even for the hurried, Sunday curfew encore, he still made time to split the crowd to teach three part harmonising for “Love Will Eat You Alive”.  Evarose and The Dead Famous were invited to the stage for this too and the evening actually ended with a bit of movement in the crowd!

With their third album already in the making, it would good to see LostAlone headlining bigger venues soon.  Why, though, has it not happened already?  Perhaps the desire to remain aloof is stronger than the craving for acceptance?  Perhaps a sense of exclusivity and an aura of mystery is just how they like it?  After all, not every band wants to be going in One Direction.

Leave a comment   |  tags: #mbloggers, Evarose, LostAlone, The Borderline, The Dead Famous | posted in Music: inspiring the pen in hand